Tools of the Star Wikia
Register
Don't have an account?
Sign In
Advertisement
in: Disney Princess characters, Disney characters, Archives

WE'VE MOVED! As of Monday, November 30th, 2020, Moana and other Disney Princesses have transported into a whole new world. Come and join us! ~Moana

Moana Waialiki is the main protagonist of 2016 animated film with the same name, and a cameo in Ralph breaks the Internet, before Vanellope.

Moana is the vibrant, tenacious and optimistic daughter of the Chief of Motunui, thriving on her island but drawn to the ocean. When her island is threatened by a dark force, Moana sets sail outside the reef and her comfort zone to right a wrong, save her people, and find the answers she's been searching for her whole life.

Moana, as Gramma Tala describes, "stands out from the crowd". She is sea-loving, headstrong, strong-willed, practically fearless, and physically capable. Though she has moments of self-doubt, she has great pride in who she is, and is generally too stubborn to back away from new challenges. Moana approaches new experiences and tasks with the utmost seriousness and will stand her ground to fight for what she values even when all seems lost. She can present herself as an imposing force despite her size and has bested the most fearsome beasts and impossible obstacles across the seas of Oceania while relying almost solely on her own intelligence.

For all her strengths, Moana suffers from major identity crises. Surrounded by a loving family and a supportive community of neighbors, Moana cares a great deal for her people, and the village in which she was born and raised. However, she also has a passionate love for the ocean and the idea of voyaging beyond her home island's barrier reef. At the start of the film, voyaging had been prohibited as a means to keep the people of Motunui safe, but even so, Moana's spirited and tenacious attitude kept her dreams of experiencing life beyond her island alive. At the same time, Moana was happily devoted to her village during her time as chief-in-training. An intelligent and resourceful leader, Moana was quick to remedy any problems her village faced and was masterful in keeping herself composed and optimistic during times of a crisis. Moana's loyalty towards her family and people actually played a part in her crippling identity crisis. As she cared for them immensely, she occasionally felt extreme guilt for being drawn to the sea, as lamented in her song "How Far I'll Go"; she believed that if she were to pursue the ocean, she would ultimately disappoint the people she loved. Simultaneously, she felt an obligation towards her ancestors, wanting to reinvigorate their ways of wayfinding as a means to honor them and the legacy they left for her people. These conflicted emotions would ultimately act as Moana's greatest challenge throughout the film.

When it was revealed that she had been chosen by the ocean to restore the legendary heart of Te Fiti, Moana did not put her focus on the potentially devastating outcome of her mission, but the unity between her love for Motunui and her dream of voyaging in the tradition of her great ancestors. Though this would ultimately benefit all parties, this mindset is perhaps Moana's greatest flaw. In being heroic and deathly devoted to her goals, Moana can be selfish in that she is willing to endanger the lives of others in order to prove she is capable of confronting her ambitions without fail. Both Tui and Maui confront Moana on this during the events of the film, and though she denied both accusations, she knew - deep down - that this was correct. She can also be reckless with herself in this regard, as she drove herself out to sea without proper training in the ways of wayfinding or even sailing. She fears very little, but because of this, she can occasionally bite off more than she can chew. However, these acts are not done with malicious, or even notable intent. Moana is extremely sympathetic and caring, which drives her to perform life-threatening stunts for what she genuinely believes to be the greater good.

In contrast to this, Moana grows with failure. After Maui refuses to assist her in battling Te Kā following a disastrous first encounter on her account, she works up the courage to redeem herself by facing the lava demon alone. She is also empathetic and looks to help herself by helping and understanding others first. This is most notably seen when she puts an hours worth of focus on coming to understand Maui and the reasoning behind his own inner demons. In doing so, she was able to exhibit self-loving wisdom (specifically regarding how one should look inside themselves for strength and guidance, and not in someone else). Moana would later use this to encourage herself during her darkest hour.

As she grew with her adventure, Moana discovered more about herself. She came to realize that no one can define who you are, other than yourself; she was neither meant to be devoted solely to the sea or solely to her people, but to herself. As such, she was able to bring her two loves together, ultimately recreating and honoring what came before her: a unity between her people and the sea.

At 16 years old, Moana of Motunui has a slender yet muscular build that sets her apart from previous Disney princesses and heroines. She has brown eyes with thick eyebrows, full brownish-pink lips, and long, wavy, black hair. Moana usually wears her hair down, only tying it in a top bun sporadically when sailing.

Moana's outfits are all made out of Tapa, Pandanus, leaves, feathers, and other natural resources found on Motonui. For her regular outfit, she wears a crop top made out of red Tapa with a layered style accessorized with seashells along the perimeter. She wears a red sash made from the same material that wraps around her skirt made out of shredded Pandanas and layered Tapa, with a slit for mobility purposes on her journey. When leading on Motonui, she wears a lei made out of green leaves and pink flowers. After Gramma Tala's death, Moana dons her blue necklace that carries in it the heart of Te Fiti.

During a brief dancing scene in "Where You Are", Moana wears a dress similar in style to her regular outfit, this time with a red skirt and a white top adorned with a white Pandanus collar, seashell necklace, and a lei made out of green leaves and white flowers, as well as bracelets and anklets on both hands and feet made out of the same material and encrusted with white seashells.

Moana also wears a Samoan-inspired ceremonial dress during the same song with a red Tapa top and skirt adorned with red tassels, a white Pandanus collar, skirt, and belt, red-feathered arm cuffs, and green leaf bracelets both with white seashells around the edge. The dress is topped off with a traditional Samoan headdress made out of shredded red Pandanus, white feathers, seashells, and other natural items found throughout Motonui. 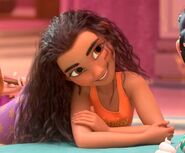 Lays: It's The Most Wonderful Time of the Year

Community content is available under CC-BY-SA unless otherwise noted.
Advertisement