LET'S GO! As of Monday, November 30th, 2020, Anna and other Disney Princesses have traveled into a whole new world. Come and join us now! ~Anna of Arendelle

To find and save her sister

The Frozen Castle of Arendelle

Princess (later Queen) Anna of Arendelle is a character in Frozen and Ralph breaks the Internet: Wreck-it Ralph 2, and actress. She is in the Disney Castle at the Disney Parks Resort. She is voiced by Allison Heart.

Anna is more daring than graceful and, at times, can act before she thinks. But she's also the most optimistic and caring person you'll ever meet. She longs to reconnect with her sister Elsa, as they were close during their childhood. When Elsa accidentally unleashes a magical secret that locks the kingdom of Arendelle in an eternal winter, Anna embarks on a dangerous adventure to make things right. Armed with only her fearlessness, a never-give-up attitude and her faith in others, Anna is determined to save both her kingdom and her family.

Unlike her older sister Elsa, Anna is optimistic, energetic, awkward, and generally far from elegant. She is also free-spirited, and garnered an extrovert mentality after years of living within the confines of the castle gates and without her sister's company. As a result, she is quick to make friends, and craves affection and companionship, though this can also act as her greatest flaw, as she can sometimes be too trusting towards strangers — an issue brought to attention with the introduction of the secretly malevolent Prince Hans.

However, while gregarious, Anna's most valued asset and the true object of her affection is her relationship with her sister. Since childhood, Anna has been attached to Elsa and greatly admired her abilities, to which she saw as unique. Throughout most of the film, Anna is also the only individual to express faith that Elsa was not a monster. This is in contrast to the Duke of Weselton, Kristoff, as well as the entirety of Arendelle's populace, who were all notably skeptical towards Elsa's benevolence, and feared at what she was capable of. Against all these odds, however, Anna remained hopeful, and fiercely assured that Elsa's true nature was gentle and caring; so much so, that she willingly threw herself into the dangerous terrains of the mountains to retrieve her sister from exile, only armed with the belief that the strength of their bond would be enough to motivate Elsa to return, which is example of Anna's powerful sense of hope and optimism. Anna relies on these traits to carry her through her hardships, and though she still faces overwhelming struggle, her buoyant mentality ultimately led to the restoration of both her kingdom's welfare, as well as the relationship with her sister.

It should be noted that, despite her optimism, Anna has also struggled with her self-confidence, on occasion. The lack of explanation regarding her enforced separation from Elsa would lead Anna to believe that she was the issue, and that Elsa simply wanted nothing to do with her. As time would go on, she would begin to fall into a toxic state of mind that manifested itself into an unhealthy need for love and companionship (again, brought into light through her relationship with Hans). This would also explain why she is so quick to find romance, as "For the First Time in Forever" shows that she's looking for someone to act as her companion, no longer wanting to be alone. She also quotes lines such as "It's just me" and "No, I'm completely ordinary", which also indicates her low opinion of herself.

Anna also tends to act before she thinks, and can be rather impulsive and quick-tempered at times, which causes quite a bit of trouble. Throughout the film, she made several imprudent decisions as a result of this trait, such as accepting Hans' suspiciously hasty marriage proposal despite barely knowing him and provoking the beastly Marshmallow despite his ferocious size and power grossly outweighing her own. She can also be quite stubborn as she initially refused to accept the possibility that Hans was not her true love, despite the valid criticisms regarding the idea from Elsa and Kristoff. Furthermore, she repeatedly went against Kristoff's advisements (such as letting him face a pack of wolves alone while she remained out of harm) throughout their adventure. Balancing this out is the fact that Anna is fearless, sometimes intelligent, quick-thinking, good in a crises and highly skilled in self-defense, allowing her to overcome various challenges, including those caused by her own lack of impulse control. She held her own against Marshmallow (despite their difference in assets), a pack of wolves, and was solely responsible for the downfall of Hans, following his villainous reveal. Instead of being afraid of Elsa's powers like everyone else she instantly decides to go find Elsa and left Hans in charge which turned out to be the right choice at the time.

In the end, despite her numerous flaws, Anna is an extremely sweet, selfless, and loving character. Numerous times throughout the film, she puts the safety and well-being of others before her own, showing great loyalty and admiration for her friends and family, most notably with Elsa. Though clumsy and comical, she has a strong sense of purity and heart, as well as fearlessness and good judgment in a crises which ultimately aids her in overcoming obstacles.

Frozen Fever shows a much more mature side of Anna's personality. While excited over celebrating her birthday with Elsa she spends the day more worried over Elsa's health and pushes her to rest, caring more about Elsa's health than her birthday highlighting her selflessness. especially after her sister almost falls off the clock tower. She also assures Elsa that she hasn't ruined her birthday.

At 18 years of age during the original film and 21 during Frozen II, Anna has a slender build and fair skin. She has turquoise blue eyes, rosy cheeks, thin lips, long strawberry-blonde hair mostly tied into two braided pigtails, bangs down her forehead, and a light dusting of freckles (a trait that she shares with her sister Elsa, although due to being slightly older, Elsa appears to have fewer freckles than Anna); her face is also slightly rounder than Elsa's. When she wears sleeveless dresses, it is shown that she has some freckles on her shoulders in addition to the ones on her face. She has a platinum blonde streak that matches Elsa's hair color on the right side of her hair due to an accident in which she was struck by Elsa's magic during childhood.

All of her outfits have rosemaling, reflecting the movie's Norwegian setting.

In her coronation dress, Anna wears a black sweetheart bodice with dark green off-the-shoulder straps and rose, teal, blue, and purple prints on it, and has greenish-gold trim, a black satin-laced necklace with a bronze pendant of Arendelle's symbol, an olive drab pleated skirt with sashes consisting of the following: asparagus centers with pink, crimson, dark olive green, olive drab, and blue prints on it between cream sides and dark green pleats, both cream petticoat and frilly knee-length pantalettes, white stockings, and a pair of black ballet shoes. She wears her hair in a bun, and a part of her hair is braided and used as a headband, a green comb-shaped barrette with a couple satin ribbons green and chartreuse attached to the back of her hair, and dark pink lipstick. She also wears a teal cape with a cyan bow as a clasp for the cape, sapphire oval-cut hem with azure line, blue dots on each cut, and small sapphire dots all around the cape.

The winter outfit that Anna acquires at Wandering Oaken's Trading Post and Sauna is a traditional Norwegian clothing called "Bunad". The design consists of a medium-length, dark blue skirt consisting of a lavender round-cut lining with points, with each rose and periwinkle print similar to a rose around the skirt on each point, and each periwinkle bush-like print on each of its round edges with a black bodice with gold trim and green, red, yellow, and purple rose prints on it, a light blue long-sleeved blouse, and black heeled leather boots with gold linings and magenta soles. She also wears a magenta bonnet with purple lining, lavender fluff, and matching white print on the back, a pair of blue mittens with navy blue palms, and a detachable magenta cape with a matching cap, purple linings, and small Byzantium tassels on the edge of the cape with a silver brooch consisting of a pair of hearts with gray prints attached to her cape and magenta lipstick. On occasion, she wears a pair of crystal clear ice skates.

After Anna's heart is frozen, her hair turns silvery-white. After she is thawed out, her hair returns to its original state without the platinum blonde streak.

In Anna's summer attire, her hair is once again braided in pigtails without her streak. She wears a timber wolf wrist-length blouse with light blue vertical linings, a pinafore dress consisting of both a light gray bodice with green linings, vertical gray hairlines, and four green buttons placed vertically on the bodice with black hairline laces attached, a dark gray skirt with a light gray lining, crimson, green, and lavender flower prints all around on it, and lavender, green, and olive drab bush-like prints between each flower prints. She also dons a white petticoat, a pair of matching heeled leather boots with gold linings and brown soles, the same color and shape of the brooch, and on occasion, the same color ice skates.

In Frozen Fever, Anna wears her hair in the same bun she wore at Elsa's coronation but with a yellow sunflower attached to the back of the bun with three ribbons hanging down (in the colors of dark green, light green, and teal). She wears a navy blue bodice which has olive, crimson, green, and orange prints on the front with copper linings, and a light chartreuse short-sleeved blouse that has a pink-and-gold brooch in the middle. Later in videos and in the movie, the brooch is now purple-and-gold instead of pink-and-gold. On top of this, Anna wears an apple-green sleeveless cropped gilet with teal, dark green, brown, orange, and chartreuse rosemaling on the front and back. She wears a teal skirt with yellow, olive, and brown sunflower prints with darker teal stalks and leaves with smaller olive, dark teal, and purple designs between each sunflower, and a small dark teal leaf design on the left, middle part of the skirt. Above the sunflower is a wavy looping yellow line with light teal dots above each loop. She wears light olive stockings, pale olive-yellow petticoats, black ballet flats, a friendship bracelet, and dark pink lipstick. Elsa used her powers to change this dress by adding sunflowers to her bun and skirt using crystalline ice and creating a hidden ice petticoat to make the skirt more voluminous.

In Olaf's Frozen Adventure, Anna wears her hair in a bun for the majority of the special, but reverts to her standard twin pigtails when she and Elsa are leading the search for Olaf. Her attire is comprised of a sky blue dress with a bells and goats patterned motif around the hemline, using the same fabric as the tablecloths in the ballroom. 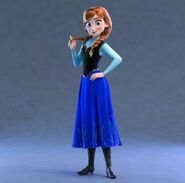 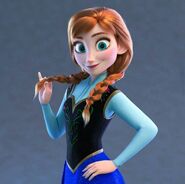 Sisters!
Add a photo to this gallery

Retrieved from "https://tools-of-the-star.fandom.com/wiki/Queen_Anna_of_Arendelle?oldid=3460"
Community content is available under CC-BY-SA unless otherwise noted.