LET'S GO! As of Monday, November 30th, 2020, I and my Disney Princesses have tangled into the new world. Come and join us now! ~Rapunzel of Corona

Queen Rapunzel Fitzherbert of Corona is an actress and a character in the film Tangled and Ralph breaks the Internet. She is also starred in Tangled: The Series and Sofia the First.

Rapunzel may have lived her entire life locked inside a hidden tower, but Rapunzel is no damsel in distress. The girl with the 70 feet of golden hair is an energetic, inquisitive teenager who fills her days with art, books, and imagination. Rapunzel is full of curiosity about the outside world, and she can't help but feel that her true destiny lies outside of the lonely tower walls. Rapunzel has always obeyed Mother Gothel by staying hidden away and keeping her magical hair a secret... but with her 18th birthday just a day away, she is fed up with her sheltered life and ready for adventure. When a charming thief seeks refuge in her tower, Rapunzel defies Gothel and seizes the opportunity to answer the call of the kingdom. With the unwilling Flynn Rider along for the journey, Rapunzel leaves the tower for the first time, and begins a hilarious, hair-raising journey that will untangle many secrets along the way.

Rapunzel is a spirited and determined young woman. Throughout her young life, she's dreamt of escaping her tower to experience the outside world. Due to the strict order of her sole parental figure, Gothel, however, she remained inside the tower. The use of manipulation and emotional abuse in her upbringing by Gothel has led Rapunzel to believe that the world is highly dangerous, and that remaining in the confines of her sheltered walls is in her best interest. Additional misfortunes born through Rapunzel's upbringing would include such traits as anxiety and low self-esteem. Gothel would often victimize herself whenever she and Rapunzel would hit a bump in their relationship, riddling the latter with guilt, which would, in turn, motivate her to obey Gothel's commands in hopes of making amends. This was all according to plan for Gothel, who relied on Rapunzel's emotional instability to forever maintain control over the princess. With Gothel possessing such a strong emotional hold - having forced Rapunzel to believe she was her only source of security and comfort in a dangerous and unforgiving world - the odds against Rapunzel were high.

Nevertheless, what separates Rapunzel from what could be classified as a "damsel-in-distress" is her willingness to step outside of her comfort zone and take on the unknown for the sake of experiencing her dreams. Despite being fearful and at times hesitant, she pushes herself forward to pursue her ambitions.

Additionally, she takes matters into her own hands several times throughout the film and cunningly manipulates situations to end in her favor, such as forcing the thief Flynn Rider to act as her guide to the kingdom of Corona after he broke into her tower. After learning the truth behind Mother Gothel and her motives, Rapunzel became fierce, immediately rejected Gothel, and strongly disapproved of any further abuse. With such will and devotion towards herself and what she values, Rapunzel proves to be a force of nature, in her own right.

As mentioned above, Rapunzel is spirited, and takes great enjoyment in virtually everything life has to offer. When trapped in her tower, she engaged in various activities such as art and music, creating a vibrant home filled with color and personality, and proving herself to be talented and expressive. When she finally escapes her tower, Rapunzel finds beauty in all she sees, from nature to a group of seemingly gruesome thugs. So much so that Rapunzel is often responsible for quite a few spontaneous, yet uplifting parties so jovial that practically every bystander would join in with zeal. This is seen during "I've Got a Dream" and during the Festival of Lights.

Rapunzel is very social in this regard and values her loved ones deeply. This is especially seen through her relationship with Eugene. Rapunzel was able to bypass the thief's roguish nature and managed to bring out his more noble and genuine side. With love and respect for one another, Rapunzel and Eugene formed a relationship built on trust, understanding, and devotion—a relationship that would better themselves individually and lead to the ultimate realization of what they truly want in life.

Rapunzel is an 18-year old (in the film) young woman with fair skin, rosy cheeks, large green eyes, brown eyelashes, brown eyebrows and light freckles around her nose. She is famously known for her long, silky, golden blonde hair which is around 70 feet in length, though her hair is naturally brown like her parents', as when it is cut, it turns so. At the end of the film, Eugene cuts her hair to save her from Gothel, turning it brown and chin length.

Rapunzel's dress is a traditional German dress called a "dirndl", with a longer skirt than that of a normal dirndl. Her dress has a purple theme with a pink accent. The dress consists of a lavender corset top laced with a pink ribbon. The skirt is purple. It is decorated with swirling and floral designs in pink, dark purple, and white. She wears a white petticoat underneath. The skirt's hemline is above her ankles, but well below her calves. Her sleeves at the top are short, puffed, and striped with pink and lavender; the rest are long and it is pale baby pink with white lace at the hems. She usually does not wear shoes and dislikes wearing them. At the Kingdom Dance, she wears her hair in a thick braid with smaller braids woven in and adorned with various flowers.

Rapunzel's homecoming dress has a white lacing on the neckline and the sleeves. It has a pink bodice that has swirly patterns on it and a corset lacing at the back. The skirt is purplish-pink with similar patterns that are found on her old dress.

Rapunzel made a brief appearance in Frozen. 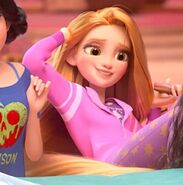 My appearance is casual! I'm sitting next to Snow White

With Elsa and Ariel, encountering Vanellope.

Do you have magic hair? ~Rapunzel to Vanellope
Add a photo to this gallery

Retrieved from "https://tools-of-the-star.fandom.com/wiki/Rapunzel_Fitzherbert?oldid=3455"
Community content is available under CC-BY-SA unless otherwise noted.